Antonio Navarro is in love with the light of his motherland, the brightness of where he grew up. He is also in love with  women, he is fascinated by the feminine nature, its enormous appeal  seems to haunt him.

Antonio Navarro´s artwork is a marvel of delicacy, light, daydreams and, ultimately, beauty. His creations, painted with a spectacular impressionist realism, immerse us, from the very  first peek ,in an unreal,  utopian world, in a happy Arcadia ,through which  he masterly guides us .

In each of his paintings the artist offers us three different dimensions; first the landscape, an environment in which nature’s lush is shown as in an eternal Spring . After that, a small still life with flowers, fruits, precious objects. And  in the centre of the composition, presiding over all, there is a figure of a beautiful woman, one  of modest gesture, one  you should look at with your eyes half closed to avoid being injured by the flood of light on the artist's canvas.

The  romantic women of Antonio Navarro belong to a dream, as if there were not real... nameless , ageless women , anonymous beings who live outside of time, ethereal entities contained in their own circumstances.

Navarro is one of the great classics of modern Spanish painting.

His artworks can be  found in Europe, USA and some other countries. 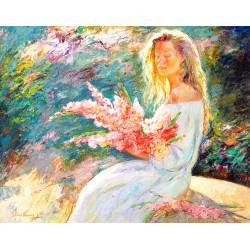 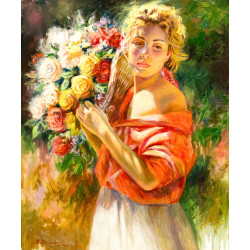 Cookies on this website are used only to analyze traffic. We only share information about your use of the website with our web analytics partners, who may combine them with other information that you have provided to them or that they have collected from your use of their services.